As noted here, D3G aims to develop guidelines that are both clinically useful and research friendly – and of course terminology lies at the heart of this aim. Collaborative input is sought from the practitioner community, so please let us know what you think as the nascent ideas take shape. 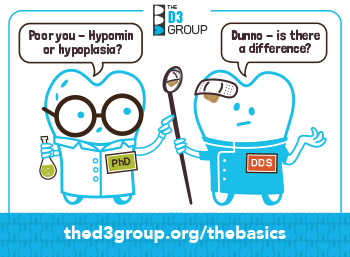 If you're wondering whether terminology is of any real importance for practitioners, we say "yes!" in a word, and "more so than ever" in four. Of course we'd all love it if D3 problems went away, and past scientific wins have given good reason for further expectations in this regard (think tetracyclines and fluoride safety). Agreeing that practitioners will benefit from more science, it's a short step to appreciate that scientists will benefit reciprocally from having key terminology understood and used carefully by practitioners. Indeed, how else
will it be known we're all on the same page and stewing over the same problems? We think getting your head around our recommended terms need not be a hassle.
Indeed, realising that scientific intricacies can be a bit
overbearing at times, we've put our translational caps
on and worked hard to distill the key elements and
present them in an understandable and memorable way.

Besides intercommunication between practitioners and scientists, we also try to think "translationally" about others who will play a key role in fixing D3 problems – affected kids and families, public health professionals, and politicians too. Will one set of terms fit all these needs? We don't think so and for this reason have developed parallel vernaculars for kids and lay people, as you will see sprinkled throughout this website – a compilation appears in the glossary below. Hopefully you'll find it fun to participate in this community-focussed level of communication too.

What's the most common mix-up?

Failure to properly distinguish between "Hypomineralisation" and "Hypoplasia" appears to be a worldwide problem, for better or worse! Historically there has been little pressure on practitioners to get these terms right, to the extent that for many "hypoplasia" remains a catch-all for anything to do with missing enamel. But that situation is no longer tenable for two good reasons – the first of which is growing need for liaison between practitioners and scientists, as noted above. Secondly, and realistically of higher priority to most practitioners, the recent surge in clinical and scientific understanding of Molar Hypomin has led to a growing number of clinical imperatives. It follows that practitioners aspiring to best-care standards must respect Hypomin and Hypoplasia as clinically-distinct entities.

Besides Hypomin and Hypoplasia, several other terms crop up regularly in the D3 world. A compilation of those terms used frequently in this website follows. We also include a colloquial adaptation of the international dental notation system, as often used in this part of the world to refer to tooth types collectively, plus a bit of practitioner slang that might also strike a chord with affected families and others.

Glossary for the translational vernacular used on this website

Aiming to have effective translational interactions across the sector (i.e. from scientists through to the public), we are trialling a multilevel vernacular for a variety of key D3 terms as follows.